A win in the Big Apple 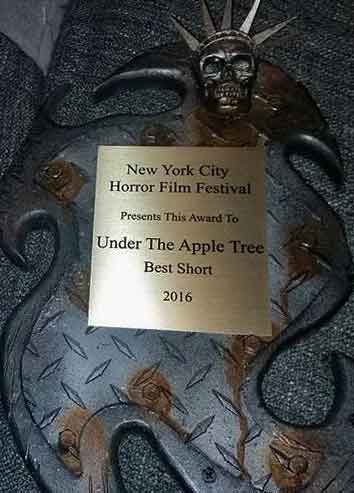 Under The Apple Tree has won Best Short at NYC Horror Film Festivall, New York, USA! The Ink And Code wrote a cracking review about the festival and our film: (Did I say cracking..?)

The New York City Horror Festival has come to an end and I’m pleased to say it was a great deal of fun to attend for the first time. One of my favorite parts was the showing of shorts before each feature film. All of the shorts were impressive, but I want to focus on the three stand-outs that really made an impression on me.
Under the Apple Tree by writer/director Erik van Schaaik is 18 minutes of macabre delight. Featuring stop-motion animation on par with Henry Selick and Nick Park, this short should be every child’s first horror experience. Never have zombies been approached in such an adorable and fun manner. The film is told from the perspective of a worm in need of shelter, with narration in the style of Poe. The unlikely shelter it finds–the body of a church groundskeeper–leads to an even more unlikely discovery: The worm can control the deceased body. I want to watch this movie repeatedly, make screenings an annual tradition in my household. It’s an instant horror classic for kids and adults. It rightfully won Best Short at the festival.

Written by The Ink And Code